This second to last call is at Jamestown, Virginia. While on this call, we learned a lot of stuff and here are some of them.
Facts:
Sorry I have to cut this short, we have another call!

-Leighton
Posted by bleemel at 8:27 AM No comments:

On our first "Mystery Skype" we talked with Denmark, a country in Europe! While this was a very exciting Skype to learn more about the country, there was also a little twist. The people we talked to were Sawyer's cousins, Kim & Annica. While Skyping with them, we found out that Denmark is a mix between a Socialist and Democratic Republican government, also known as a Monarchy. Another thing that we found out is that when we were talking with them at 4:00 P.M., it was 11:00 P.M. there. Another thing we learned about is the main source of economy, being pork. Another big one is the windmill, which was actually created in Denmark. Now, they are manufactured in Denmark and shipped out to places that have ordered them. One of the last things we learned about was the weather. The weather in the winter is extremely cold with highs not typically getting above 0℉ which and in the summer the highs do not get above 77℉!
-Sawyer
Posted by bleemel at 8:05 AM No comments:

National Museum of the Pacific War

On to the National Museum of the Pacific War! This museum is located in Fredricksburg, Texas. In this call, we learned many new things like the Americans won every battle they had against the Japanese once they entered World War II.  Then when America entered WWII, America's army was ranked #15 or #16 because of the inattention it had been getting because of the Great Depression. After the Japanese attack on Pearl Harbor, the U.S. declared war. Our manufacturing force was much better than Japan's, which would be a huge advantage in the war. We produced 5 million M1 Grands (an advanced gun) during the war.  It was a wonderful history lesson, where we got to add to our knowledge. Thank you so much for speaking with us, hope you have an awesome day.
- Alyssa, Caitlyn, Ansuman 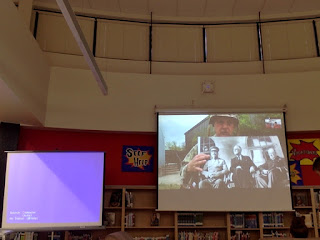 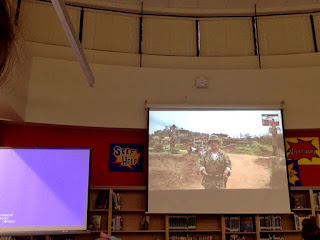 Posted by bleemel at 7:21 AM No comments:

Email ThisBlogThis!Share to TwitterShare to FacebookShare to Pinterest
It is currently 8:30 A.M and we are interviewing a person in a mystery place. We will be leaving the clues and evidence to figure out where we are. This place is in the U.S and kind of boarders the water. This is on the East Coast in Northernmost Southern area.  She is above North Carolina, she is not in Maryland, New Hampshire, and Pennsylvania. She is in Washington D.C.! She is in a historical location. She is at the white house! She keeps track of all president speeches, statements, remarks, etc. She edits them so that it fits within the guidelines of the Government Office. She falls under the National Archives and she compiles all information even tweets if necessary. 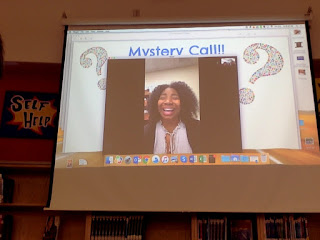 For our next stop, we are going to Belo Horizonte, Brazil which is the capital of Brazil. Today he was showing us the cities downtown area, which according to him is not very pretty. He also mentioned that it can sometimes be dangerous, especially at night time. Next, he talked to us about the holidays they celebrate which include Carnival and Mardi Gras. Some other things he talked to us about was what make the cities beautiful. One thing that makes the cities special is some of the architecture in the city, as well as just the heritage. Unfortunately, there is not much history behind the city. 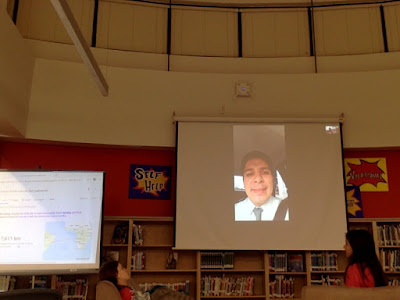 Posted by bleemel at 5:48 AM No comments:

It is 6:30 right now, and we just began our next call with people in Zambia, Africa. Right now it is Friday, March 13th at 1:25 P.M. in Zambia. We are talking with a teacher at American International School of Lusaka. In Zambia, a normal school day begins at 8:00 A.M. and ends around 1:45 P.M. He told us about how the school is preparing for the spread Coronavirus, although right now there have been no reported cases in Zambia. When he was showing us around the school and Zambia itself, we got the chance to ask some students some questions about how the learning style is similar and different to ours, and shared with us what they like about the school. He spoke about his greatest experiences at Victoria Falls, which are groups of waterfalls in Zambia, and safaris, where he was only 10 feet away from a hyena.
-Juhi and Sawyer 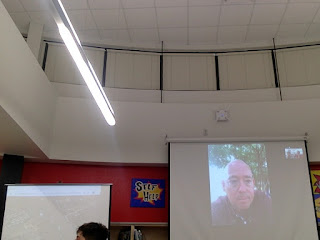 Posted by bleemel at 4:48 AM No comments:

For this mystery call, we happened to end up in the Netherlands. We asked yes or no questions to figure out their location, and finally guessed it. One of our first questions, which was answered with a yes, was "Are you in Europe?" They didn't know who we were either, so they asked us questions as well. They correctly guessed that we were in the United States, as well that we were in Texas. However, we figured it out first, and they found it out shortly after.  So far, we have guessed that they are in a school west of Amsterdam, in a town called Kwintsheul. It is currently 9 am on March 13th where they live. We learned how to say hello in their language. It is hallo or hoi. 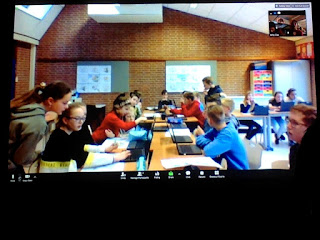 Posted by bleemel at 1:37 AM No comments: